I know, I know, one of them “owns” the story and is the one who changes/changes most and blah blah blah but really actually they’re both important and they both need to arc and so I went ahead and started with the heroine, because I feel like I struggle more with her (she’s been through several drafts being Too Dumb To Live, Femme Rambo, and/or a lump of clay; I’m still working on making her, you know, believable). 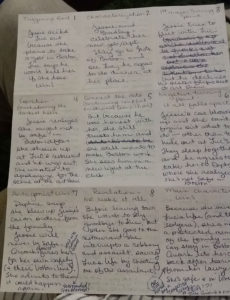 And the thing is, as I was working on Jessie’s  sheet, I thought, “Hmm, maybe the problem is that both characters arc but their arcs sort of leapfrog–her box #6 is is box #5, his #6 is her #7…” But getting through the last three boxes really helped pieces fall into place, and I started to see patterns (for example, boxes 1, 4, and 7 all have our heroine boldly going where she really should’ve have been, and that always results in a conflict that forces her to question her perception of safety and re-evaluate her relationship with the hero (er–the male MC, that is–I suspect he’d object to ‘hero’).

And it occurred to me, when I was about 2/3 of the way through, that I could pretty easily fill out the sheet for both of them.

After all, a sheet of paper has two sides… right?

And doing the boxes for Jessie’s plot line had shown me some holes and helped me make some connections. So definitely worth the time to do it for Luc, especially since at first I thought he’d be easier (he’s got more to do in the mystery/action plot, or at least… I thought he did?). 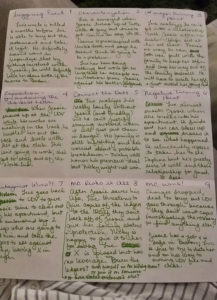 So, on the reverse, here’s good ol’ Luciano, and–wouldn’t you know it–filling out the boxes helped me figure out some more connections and throughlines (his boxes 1, 4, and 7 all involve him trying to do damage control after Jessie’s turned up somewhere she shouldn’t be; 2, 5, and 8 all have him take a risk to protect her, and they escalate from small (asking his cousin for a favor) to major (risking his life). It also helped me figure out some of the weaknesses (sadly, I’m not just calling the antagonist “X” right now because I think you’re going to zoom in on the picture and learn all my secrets…. it’s cause I’m still very much on the strugglebus re: my antagonist).

Oh but speaking of antagonists…

Guess who’s got lots of pens and a whole ‘nother sheet of paper??

But maybe I’ll just fill out this nine-box chart instead for the antagonist and the minion??

So, while none of this is actual writing in the sense of wordcount I can brag about or use to justify my claim to be a writer, it is helping me move in that direction. And since this book’s been kicking around and getting pantsed out by me and my partner for about four years, and since there’s over 140k written, chopping it down to the main ideas is probably a pretty good idea.

Coming soon: whether or not adjusting the chart for my antagonist bears any fruit, and whether or not this chart works from my YA Cli-Fi WIP as well as it did for this one!

3 thoughts on “The Unstickening, Part I”