I wanted to post a response to the Tweetstorm happening surrounding #TheContinent (a YA book with some serious “White Savior Narrative” stuff going on, click that link for a summary) and Jenny Trout’s response (in which she calls out her own use of racist tropes in some of her older books).

But I also want to watch election returns, so I’m probably going to go do that.

I’ll be back tomorrow with some thoughts about how I know #WeNeedDiverseBooks but also: I am a white lady.

Hopefully having survived watching the election returns (rather than posting as some sort of post-election zombie).

END_OF_DOCUMENT_TOKEN_TO_BE_REPLACED

Last weekend, my husband and I hosted our annual Valentine’s Day party. This was the first year when my darling son could attend (him being currently nine months old) and even though he went to bed before the party had hit its apex, I think it’s safe to say everybody had a good time.

I started throwing these parties as small dinner parties the year we had my “fake kid” living with us, because I wanted to do some family-style activities and she had recently been through a breakup. My parents had always made sure to celebrate Valentine’s Day as a day about everyone you love–not just romantic partners–and even after I graduated from college I would occasionally get a package of conversation hearts in the mail from them.  END_OF_DOCUMENT_TOKEN_TO_BE_REPLACED

Today at Janet Reid’s blog, they’re talking about pseudonyms. The discussion was brought on by a particular case in which a man published poetry under a pseudonym that was deliberately chosen to sound Asian (the man is white). Sherman Alexie, one of my faves, writes about the situation here, in case you’re interested in more info.

So, the commentariat at Janet’s place are now discussing the issue, but from the perspective of writers seeking representation: should you use a pseudonym? If so, should you tell your agent?

I was planning, actually, on setting this blog up and writing under the name M.P. Larkin. Much like J.K. Rowling, L.M. Montgomer, L.J. Smith, and, yes, okay, fine, E.L. James, I was going to do the lady-using-two-initials-to-maybe-pass-as-not-a-lady-but-maintaining-plausible-deniability thing. Recently one of the writers at Jezebel realized this might still be helpful in getting published, just like the Brontë sisters had do to… END_OF_DOCUMENT_TOKEN_TO_BE_REPLACED

We’re reading The Picture of Dorian Gray in Novels this semester, and since we’ve been reading about how well Basil captures Dorian’s essence in his portrait, our first creative project is to annotate selfies (or photos of ourselves, for the student who says he refuses to ever take a selfie on moral grounds) to show what our appearances reveal about our true natures*. 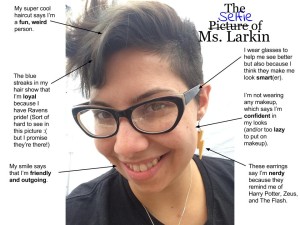 Portrait of the Artist as a Young (Wo)man – click to see larger!

One of the things that was mentioned in multiple MWW workshops this year was the idea that–to the dismay of Victorians–phrenology has been disproven; that is, there are much more important things about your character than details of appearance. At her MWW one-day intensive session, The Writer’s Survival Kit, Martha Brockenbrough begged us, “Please don’t start with your protagonist waking up in bed and catching sight of herself in the mirror. Isn’t there a whole lot of stuff that’s more important to know about your character than that she has green eyes?”  END_OF_DOCUMENT_TOKEN_TO_BE_REPLACED

This workshop was AMAZING! I got a ton out of it and it really had the most breadth in terms of a writing conference that could meet the needs of people at all levels, from novices just starting their novels to published authors looking for networking opportunities. END_OF_DOCUMENT_TOKEN_TO_BE_REPLACED