So, been doing the 10-minute-March thing for a week, and I gotta say–it’s been fun!

But I don’t want to waste my whole ten minutes on the blog, so…

That’s all for this week! 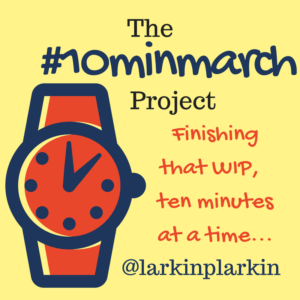 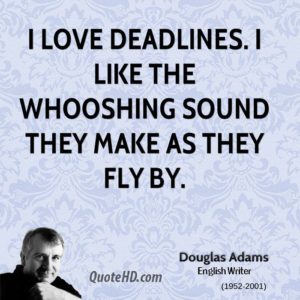 Some things I’ve been putting off lately:  END_OF_DOCUMENT_TOKEN_TO_BE_REPLACED 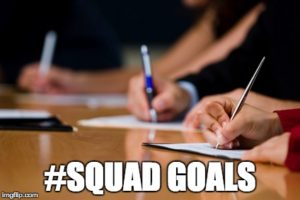 One of the things I constantly struggle with is finding time for writing. I work full time, have a toddler, and occasionally pretend to have a social life, family life, or marriage. When the heck am I going to fit in writing?

I jot stuff down from time to time, of course, but usually my best ideas come when–I’m way too busy to do anything about them.

And I’m not at a point where I can turn it on like a faucet and just squeeze in half an hour of writing every day. (Someday, maybe?)

So one thing that I’ve been trying to make time for is writing dates: times when I set aside time with some accountability partners to Get Shit Done.

Sometimes this is more effective–when I’m primed for it–and sometimes less (like tonight, when I’m tired after a three-day weekend where I was solo parenting while C worked). It can be really hard to hit that sweet spot. I think making it more regular might help, though, so my writing buddies and I have agreed on two more dinner-and-writing dates in the next three weeks–meaning that, hopefully, I’ll have 10 more pages to turn in to my writing group by our next meeting! Right? 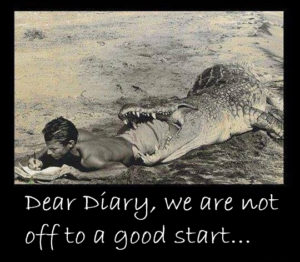 Hey, remember how I was going to blog twice a week, Tuesdays and Saturdays??

On the plus side, I spent about four hours yesterday working on writing (lesson plans, work emails, and then–eventually!!–working on the RSWIP with my cowriter in a super-sweet new-to-me coffee shop. So good overall! And I do intend to continue with Tues/Sat as my preferred blog schedule… even though this week I was lying in bed ready to sleep Tuesday night before my eyes flew open in a panic as I remembered I’d forgotten to update the blog. 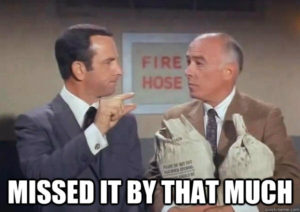 Aaaanywho, despite having pulled a Maxwell Smart on my first regular blog update of the year (whoooops), I did still get a good deal of writing done, and I’m excited about it–tonight I’m back at it and have just cut over 1200 words from the draft I’m revising.

AND I’m also strangely nervous about this, but I’m going to be submitting pages from the RSWIP to my crit group. Why is this weird? Who knows. Why is this somehow scarier than giving them pages from the YA-SFF-WIP? Maybe because this is Romantic Suspense and nobody in IndyScribes “writes romance” (although most people’s stuff has romantic subplots from time to time) and I feel weirdly embarrassed and dorky about liking Romance, despite the fact that it sells super well, and is super popular, and since when do I care about people thinking I’m a weirdo?!?!

I was nervous the first time I sent them pages from the YASFFWIP, too, so probably it’s just that overall nervousness of “okay I’ve been working on this with my whole heart and soul for literally years now but tell me what you REALLY think of it” and I’m sure it’ll be fine. 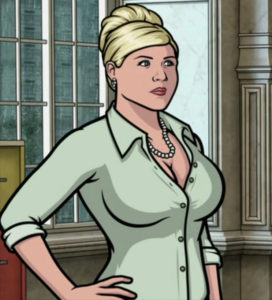 Among other resolutions, of course. But don’t worry, no “new me” stuff — as Pam says, I really like me. END_OF_DOCUMENT_TOKEN_TO_BE_REPLACED

I am way too sleepy to write tonight.

Tomorrow is a new day! And I have a writing date set up for Thursday. So that’s something.

Well, I’ve done it again–in my household we call it “gooning yourself,” but elsewhere it would just be called “staying up way too late goofing off and accomplishing nothing except ending up overtired tomorrow.”

See why we just say “gooning”?

So, in addition to gooning myself sleep-wise, I gooned myself writing-wise and have run out of time to do either.

I’ll try to redeem myself tomorrow.