Anyway, if you’re impressed by how ill-prepared I was then (at least I remembered clothes? I did forget a toothbrush, but Bob gave me one.), guess what happened next?

I lost the notebook. (Bet you were wondering why I hadn’t really talked much about that experience in this, my writing experiences blog…?) Not before taking copious notes both at Write on the River AND at the IRWA’s Making Magic Conference, of course.

Good news, though! I recently found it again–I wasn’t sure what it was at first, because it was in a pile of my stuff but starts off with some kid’s algebra notes, some art notes, a super amazing illustration of Banana Man trying to save students from our burning school while Pancake Man curses him (no, seriously, that is a thing that is in this notebook), and a bunch of pass-back-and-forth notes full of swearing and horrifying personal information. Uh, and my notes from the retreat, illustrations for the nursery I have yet to set up (Sarge is 4 months old tomorrow), notes from IRWA, and many many many to-do lists (averaging about 50% “done”).

Anyway, now that it’s located, I will be telling you more about what I learned at WotR and IRWA’s MMC.

Banana Man’s adventures I’m saving in case I get stuck on my WIP (“Watch out, here comes… BANANAMAN!” seems like a pretty good way to get un-stuck.). 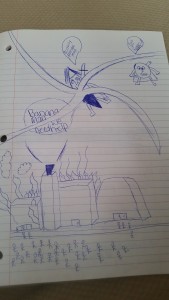