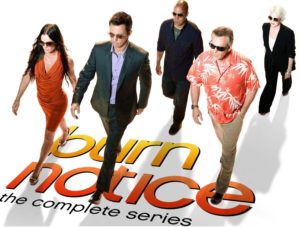 So, thinking about teams again: one character I really like is the goofy-but-loyal sidekick who comes through big. Sam Axe from Burn Notice is one of my favorites. And image-searching for pics for this post gave me such a yearning to re-watch the series that I’ve got the pilot playing in the background now. I love every single one of the main characters; it’s interesting to think that I almost quit after the pilot (only stuck with it based on a friend’s recommendation).

You know, if the Burn Notice team is a five-man band…

The Leader is obviously Michael. The Lancer could be Fiona, Jesse, or Sam, but since it’s supposed to be a contrast to the leader, I’m going to go with Jesse (who was burned by burned spy Michael, and who’s clearly a foil for a Michael in many ways). The Smart Guy is Madeline, who’s “physically weak but…clever,” although instead of being unconventionally young she’s unconventionally old. The Big Guy is probably Fiona (who, I had completely forgotten, drunkenly headbutts a musclebound guy, takes the gun he was holding on her, pistol-whips him, and then tries to drag Michael to bed immediately afterward). And, once again, I’m assigning a dude to be The Chick, because Sam is definitely the big soft teddy-bear “heart of the group” who’s in “a peacekeeping role to balance out the other members’ aggression” but come on, TV Tropes, why do you insist this HAS to be a female character? It’s obviously not Fi or Madeline.

Thematically, I love this show because it’s got some of those ideas that really resonate with me:

These ideas pop up in most (all?) of my favorite works of fiction. And this show definitely shows that cleverness trumps strength (“I’d take duct tape over a gun any day. Guns make you stupid. Duct tape makes you smart”).

AND the last episode of Burn Notice does one of my very favorite things, which is give you a new piece of information that recontextualizes the entire series without contradicting any of it in any way. I seriously am happy/jealous/floored every time I think about it, you guys. Every time.

Ugh. It’s now about an hour and a half later than when I planned to go to bed (WHOOPS) but it was worth it… it was all worth it. Mostly for all the fun I had doing Burn Notice image searches. <3

So I’ll just leave you with this delightful Before/After combo (both from Season 1):

I really need to figure out how to get this dynamic going in my TCWRSWIP.