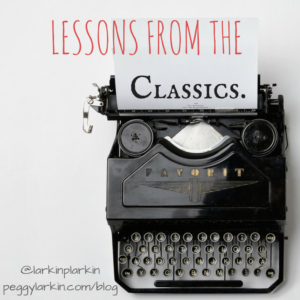 Oakhurst is strong–a classic John Wayne Romantic hero, the guy who’s better than the system he’s trapped in, using his strength to protect others according to his own code of ethics, even when society says he shouldn’t. He’s introduced as a gambler (so, definitely a Bad Guy, barely one step above a thief), but right away the narrator shows us that Oakhurst is sensitive and that he has a “calm, handsome face” that “betrayed small concern” when he realizes that “I reckon they’re after somebody… Likely it’s me'” (2). And early on the narrator tells us that “it was only in… easily established standards of evil that Poker Flat ventured to sit in judgement” (3). Oakhurst is presented as being better than the reactionary judges that boot him from town: “He was too much of a gambler not to accept Fate” (5). Later, everyone else is upset, but he stays cool, with “easy good-humor” (7).

He tries to keep the outcasts together; he gives the Duchess his horse, leads the making of camp, and tries to protect the others from Uncle Billy’s betrayal. Oakhurst won all of Tom’s money in a card game, then gave it back, warning Tom against gambling (“‘Don’t try it again'” (11)). He sends Tom for help, saving The Innocent (Tom’s nickname–very subtle) yet again. He’s competent, and he wants to protect the weak and innocent–even though he’ll happily live by gambling and taking money from the rich.

The strength of Harte’s characterization is in the fact that it’s indirect and based on action–emotion lives in the body, and actions speak louder than words–and in the fact that the actions are often unexpected. A gambler giving up his horse to a prostitute? Sure, a gentleman would give his horse to a lady–but society has literally just rejected both of these characters; Oakhurst still gives up the horse. A father would give good advice to his son; Oakhurst gives fatherly advice (and money) to The Innocent of Sandy Bar.

I suppose that’s Harte’s way of having him Save The Cat – have him do something good so that you know he’s a good guy, even though he’s just been cast out of town for immorality.

In my RSWIP, the hero’s in the mob. Like, nephew to the Don. So it’s important to me to establish early on that he’s no Sonny Corelone. He’s not even Michael.  He’s not even Fredo! So his first scene involves some chances to save some cats:

Yeah, that third one’s the big one, but I’m hoping that building up to it makes it believable–my goal is to establish that he’s a good guy, despite the fact that he’s also, well… you know. A bad guy.

So, like Harte does with Oakhurst, I want to make sure he’s got some gentlemanly traits–protective of others, calm and fair-minded–to contrast against his (involuntary) affiliation.

Don’t worry, though. I’m not planning to take this story in the direction of Naturalism. Most of the characters won’t be dead at the end.

*No, not that Bret Hart.