Well, having spent yet another month sick (do not ask me about last week–it was horrifying) I have fallen behind on my blogging goals AND everything else in life… but, on the plus side, I now have a WattPad account and I entered SyFy’s The Magicians writing contest with an entire HOUR to spare.

My entry is very silly.

I do, however, intend to read some of the others.

I just started watching Season 1 of The Magicians (SyFy) on Netflix last week and have been steadily bingeing through all of it with C. Tragically, tonight he has choir and all we have left is the finale and Season 2 premiers TOMORROW and it looks like SyFy lets you watch things online live and that might (MIGHT) be enough to get me to forgive them for spelling their name that way (SyFy? Seriously?). 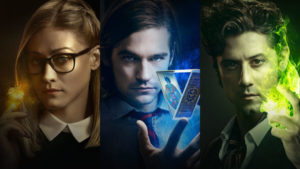 As we went through the episodes–“This is like if someone was writing Harry Potter fanfic and kept going further and further off course… in the best possible way,” I said, early on–I started Tweeting about it, made some friends via hashtags… I might or might not have followed most of the cast on Twitter. Um… uhoh. Am I joining a fandom??

I’ve been thinking about adding TV recaps to my blogging fodder. I think maybe #TheMagicians might be the show I choose.

Unless I just spend the next few weeks entering their writing contest (i.e. FANFICTION!). 1500 words by Feb. 8th…

Piece of cake. I’ve got plenty of time and tons of ideas.