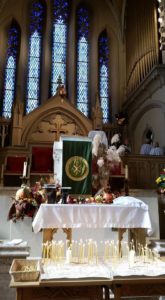 I’ve been meaning to write about it for a long time; I kept thinking that in a few months, I’d be able to handle it. Writing, for me, has always been a way of handling it–of imposing order onto my thoughts, or sorting out the causes and effects of something, or of creating a world that was entirely within my control when the real world was frustratingly beyond it.

I’ve been putting it off and putting it off, because even though I don’t cry every morning any more, I do still sometimes hit a “grief pocket” every now and then–at random times–when I read a poem that he loved, or when, say, a song on the radio turns into an emotional ambush–suddenly it’s there, the lump in my throat and the burning eyes.

Today’s service was a pretty intense one, what with “the loved we’ve lost are now saints in heaven, let’s remember them” as its explicit theme. And the sermon was all about how Isaiah used his words to create a hope for the future from a place of suffering and sorrow.

It made me think tonight might be a pretty good time to finally tackle that personal essay I’ve been wanting to write–a genre I don’t usually have any interest in, but then again, maybe it’s my father’s spirit moving me, since he was a journalist for 25 years, a man who took very seriously the importance of exploring the world through writing.

A friend just lost her father suddenly, and she texted me–

“It’s kind of funny this entire time I’ve been thanking my lucky stars how sudden it was My sisters and I both agree that we absolutely can’t imagine having to anticipate this level devastation for a prolonged period of time…  having to go about your daily business Working, being busy, trying to act normal all while knowing that somebodys life who you care about so much hangs by thread We seriously are considering ourselves very lucky that he didn’t suffer a single second, didn’t have to be scared and had no idea and was completely oblivious that it was even happening”

I see her point, but when I found out that she had lost her father so suddenly — heart attack — I thought, Oh, how awful–no chance to say goodbye.

But we never really say goodbye, do we?

The poem my father read again and again during the end of his life, that was bookmarked in the book of poems at his bedside when he died, and what we had printed on the prayer cards that we handed out at the funeral, was this one:

The Lake Isle of Innisfree

It helps me, to know he knew. He always wanted to know what was going on–with his family, in the world–and he was always a planner. He planned most of his own memorial service. Sometimes, when I’m in those pockets of sadness, I hear the hymn he chose. And the lyrics are so comforting; it’s just what I need to hear. He chose well. It always mattered to him that the words be just right.

He loved words so much; my mom and my brother both gave beautiful tributes at his memorial, spoke beautiful words, but I chose not to speak. I couldn’t. I would, as I told them, need a non-speaking role, because I would, I predicted, sound like a manatee if I tried to talk.

And I was right; I cried steadily throughout the service, stuffing sodden tissues into my sister-in-law’s purse next to hers after my pockets were full. I carried his ashes to the altar, then to the gravesite; that was easy, because I didn’t have to speak.

There were no words.

And I’m still having a hard time coming up with the words, putting them in order…

Writing has always been an outlet for me, because I could control the words. But for this…

My dad, I’m sure, would’ve directed me to the perfect book to help, then gone through what I wrote and struck all the unnecessary commas and helped me get my sentences into tight, evocative perfection.

As you can see, I’m a bit of a rambler if left to my own devices.

So, for now, let’s just end it with this, put inexplicably well by none other than Wiz Khalifa:

And if I ever get around to writing about it, I’ll be sure to drop a link off here.

Happy All Saints’ day, everybody.