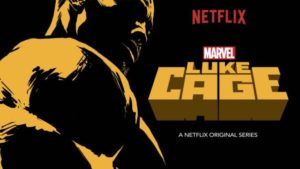 Don’t get me wrong -there’s lots of stuff that doesn’t necessarily advance the plot that I still enjoy having in there: the musical numbers (which some say remind them of The Bronze) are awesome, the long moody shots to create mood are great, and I don’t even mind the increasingly goofy scenery-chewing of the characters (srsly gettin goofy though with the villain in the second half of the season). That stuff’s not what bothers me. What bothers me is that the plot just… sags.

This may be partially an effect of the idea that they’re trying to get people to binge-watch: nothing happens for most of the episode, then SOMETHING CRAZY HAPPENS in the last few minutes!!!!! OMG AUTOPLAY, START NEXT EPISOOOOOOODE!!!!!!

Ahem. Where was I?

It gets to the point where–since Netflix saves my place–I’m starting to seriously consider just starting and stopping mid-episode, like some kind of postmodern enjambment situation.

Jessica Jones had this problem occasionally; I complained about the first episode being mostly exposition, whereas I’m trained to want an inciting incident right off the bat–the trend in writing is to start in medias res, and after all, I am trying to be a writer, aren’t I?

But it seems to be getting worse the longer Cage goes on. Maybe I’m just losing my patience for it; or maybe it really is just weak pacing.

Or maybe just weak writing overall? The visuals are great, the acting is generally good and occasionally wonderful; the plots… and the characters…

I still think Luke’s a problem as a lead character–Misty and Mariah are both infinitely more compelling, and work well as foils, too, since they’re both women who came up in Harlem and want to make it better, but with diametrically opposed strategies for doing that. Cottonmouth has goals (run the drug game in Harlem, make Harlem’s Paradise a successful and respected club, kill Luke Cage…). That makes him interesting to watch, without even factoring in his general unpredictability.

Luke… still pretty much just wants to hide, run, not get involved, etc. (It looks like most of the reviewers on IMDB agree with me, actually, as I learned when I went to steal some images to liven up this post. So I’m not alone!)

I found an interesting negative review of Luke Cage that talks about how most of the characters are pretty stereotypical, cartoonish versions of themselves, and I pretty much agree with that. The author, Isobel de Brujah, writes:

Look, part of this can’t be helped. The source material is made of racist stereotypes. That’s just factual.   A Black hero in the 1970s had no chance of being anything other than Blaxploitation and that’s pretty much all Power Man has ever been. The comic was racist. The villains were racist stereotypes just like the hero and the story was made of racist tropes. It’s generally not a great comic and has always been problematic. It’s just that, at the time, that was all we had. So we accepted it, bad as it was because representation matters.

I’m not at all familiar with the comics (hadn’t ever heard of Jessica Jones either, although I’d read and enjoyed several Daredevil TPBs in high school). But early on in the series I remember wondering if any of the writers were Black, because the writing sounded (to me) like what a room full of white writers would think Black characters should sound like. Maybe it’s just that the Black voices I’m used to hearing are younger and from the Midwest, not Harlem; I found some info on the series creator, Cheo Hodari Corker, who is Black, but then I got bored and gave up–most of the episodes are credited to different people, but Corker has the credit for the first and last episodes.

Anyway, this problem I’m having got me thinking about my own Mushy Middles. I struggle very much with finishing things–I’m a pantster, I write out of order, I often end up with a beginning and and end and no middle OR a beginning and… an endless, picaresque, bloated midsection that doesn’t seem to be heading to any type of resolution (Romantic Suspense WIP, I’m looking at you… and your 143k words of incoherence…).

Maybe this will help me kill my darlings?

What definitely won’t help me is hate-watching Luke Cage episodes while I play Dots and don’t update my blog, grade papers, or write anything. So, uh… #resolutions, I guess?

On the plus side, I have not yet given up on NaNoWriMo in despair, and it’s halfway through the month! VICTORY*!

So, if you made it this far: what do you do when the middle gets mushy? How do you make sure every scene is moving the plot forward? How do you cut out the stuff that isn’t making your readers turn the page (or, at the very least, sit back while Autoplay takes over?).

*ok, not yet. Only halfway. But closer than usual!